What are Executive Functions?

Although there is as yet not one universally-accepted definition of Executive Functions, .  the examples below illustrate some of the common elements generally found among varying definitions.

A set of multiple cognitive processes that act in a coordinated way to direct perception, emotion, cognition, and motor functions.   (McCloskey, 2007)

Executive Functions are multiple and interrelated higher level brain processes that direct how we monitor and manage our thoughts, emotions, and actions.

Team of conductors/co-conductors of a mental ability orchestra

The dynamic interrelationships that have been described as as “Hill, Skill, and Will” are represented below. 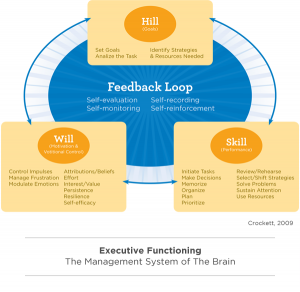